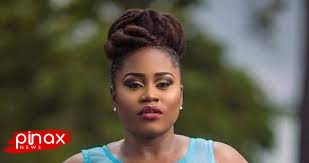 The popular actress,complained bitterly on her twitter handle, she mentioned that the current government tend to make excuses for everything they ‘crucified’ the opposition National Democratic Congress Party(NDC) for back then.

According to the actress,the excuses of this government was like being last in class and then,insisting the exams was tough for everyone.

She tweeted “Excuses. Excuses. Excuses. But. But. But. It’s like being last in class but insisting it was a tough exam for everyone; ok, but you failed while others passed, so? It’s really interesting how this government has excuses for the very things they crucified the NDC for.”

This comes after the President granted an interview with BBC’s Peter Okwoche on April 4, which sparked lots of reactions in the country and beyond.Some important topics which was addressed during the interview was the state of Ghana’s economy and the controversial E-levy, where the President insisted that the economy of the state is not that bad.

He straight up blamed the terrible state of the economy on the the Covid-19 pandemic and also the recent Russia-Ukraine crisis.