Pre-wedding Photos Of Actress Rita Dominic and Her Soon To Be Husband,Fidelis Anosike Surfaces Online Ahead Of Their Wedding 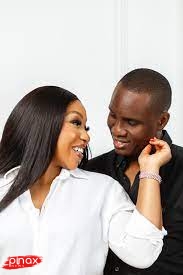 Popular Nollywood actress, Rita Dominic is set to tie the knot with her fiancé, Fidelis Anosike and people are gushing over their released pre-wedding photos ahead of their wedding.

Cutie and lovely pictures were seen on Bellanaija’s wedding page.

The beautiful images surfaced after the actress opened up about her plans for marriage and how she would like her marriage to be beautiful forever,during an interview she had with Chude Jideonwo.

She made a statement saying “I respect the institution of marriage as my parents were married till they died, and they had a beautiful relationship. The problem is at some point, it begins to annoy you because of how much importance people have placed on it.

I do want to marry, and I want to get it right once and for all. You know, we make such a big deal of it, we force people and put pressure on them to go in. When they eventually rush into this union, they make mistakes because they were only trying to please people,” she added.

See The beautiful pre-wedding pictures below.